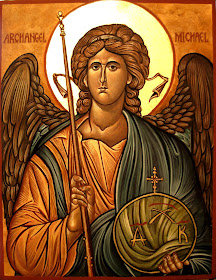 The Holy Archangel Michael is one of the most celebrated of the Angels and bodiless powers; he is called the Archistrategos, or chief commander, of all the bodiless powers. According to Holy Scripture and Tradition, he has interceded for humanity multiple times and continues to serve as the Defender of the Faith. St Michael is most often invoked for protection from invasion by enemies and from civil war, and for the defeat of adversaries on the field of battle. He is celebrated primarily on November 8, the Synaxis of Michael and all the Bodiless Powers of Heaven; September 6 also marks the miracle of the Archangel at Colossae.

Perhaps his most famous miracle is the salvation of the church at Colossae. Here a number of pagans tried to destroy this church by diverting the flow of two rivers directly into its path. However, the Archangel appeared amongst the waters, and, carrying a cross, channeled the rivers underground so that the ground the church stood on would not be destroyed. The spring which came forth after this event is said to have special healing powers.

Michael also has been associated with healing in other cases, as well as his primary role as leader of the Church Militant. He has been said to appear to Emperor Constantine the Great (d. 337) at Constantinople, to have intervened in assorted battles, and appeared, sword in hand, over the mausoleum of Hadrian, in apparent answer to the prayers of Pope St. Gregory I the Great (r. 590-604) that a plague in Rome should cease. 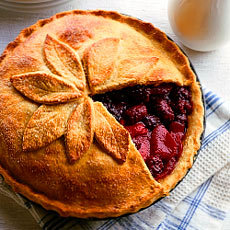 In Ireland, it is custom to make a "Michaelmas" pie on the feast of the Archangel Michael.

Archangel Michael is also the patron saint of police officers, military, grocers, mariners, paratroopers, and sickness.
Mothers of Orthodox Preschoolers at 3:06 AM
Share